Days at sea are the perfect opportunity to relax, unwind and catch up with what you’ve been meaning to do. So whether that is going to the gym, visiting the spa, whale watching, catching up on your reading or simply topping up your tan, these blue sea days are the perfect balance to busy days spent exploring shore side.

Charcoal-black mountains ladled with snow, giant glaciers and thriving wildlife combine to make South Georgia one of the great natural islands. Adventure to these far flung lands - where the animals are in charge and humans come a distant second. Here you'll witness a cacophony of calling birds, natural set pieces like elephant seals clashing and thrashing, and crowds of colourful king penguins stretching out as far as the eye can see. An overseas territory of the UK, these isolated, subantarctic islands once formed a remote whaling centre - and you can still visit the former whaling stations. Nowadays the giants of the sea are free to cruise the icy waters uninhibited. Written into explorer history due to its links with Ernest Shackleton’s tale of Antarctic exploration, shipwreck and survival, the Endurance’s crew were saved when he reached the salvation of these shores in 1916 - before returning to collect the remaining sailors from Elephant Island. A museum commemorates the legendary mission, and you can see the memorial to Shackleton that stands over his final resting place on this fabled island. South Georgia’s colonies of king penguins - with vivid bursts of yellow and orange around their necks - stand, squabble and curiously investigate, enjoying the isolated respite of this island. They’re joined by smaller penguin species like Macaroni penguins, and other glorious birdlife like the majestic wandering albatrosses, which you can see gliding on gusts of wind, over the choppy waves.

Sailing the legendary Drake Passage is an experience that few are ever lucky enough to experience. The southern tip of the Americas already feels like a wild enough environment – but the sensation of watching the distant cliffs of the peninsular known as the ‘End of the World’ fade into the horizon, is one that’s equal parts epic, eerie and magical. Set sail, to slowly drop off the bottom of the map from Cape Horn, and voyage on an expedition down into the icy underworld of Antarctica. Drake Passage is an extraordinary voyage of romantic ocean faring legend, as you aim for Antarctica’s icy realm. On arrival, skyscraper sized icebergs salute you, as you traverse the waters of this continent where snow and ice dwelling creatures like penguins and whales roam undisturbed. Your first sight of this most-unexplored place will most likely be the South Shetland Islands. Walk in the footsteps of some of history’s greatest and bravest explorers as you explore famed, snow-covered landmasses like Elephant and Deception Island. If the journey across Drake Passage sounds daunting, don’t worry – even in rough seas you’re never alone, and will often be accompanied on this spine-tingling adventure by soaring albatrosses and maybe even a protective pod of humpbacks and hourglass dolphins or two. Converging warm and cool ocean currents attract some spectacular animal life to the passage. If this is your first visit to this magical continent, you’ll also want to familiarise yourself with our blog for first timers to Antarctica.

Few voyages ignite the imagination like a journey down to one of the planet’s most remote, extreme and enchanting wilderness, Antarctica. An adventure in its purest form, only a handful of people will ever be lucky enough to experience the majestic beauty of these monochrome landscapes first-hand. The Antarctic Sound will be one of your first encounters of this whitewash kingdom, located at the northerly tip of the Antarctic Peninsula - which sprawls up like a tentacle towards Tierra del Fuego, South America’s most southerly point, otherwise known as the ‘End of the World’. Taking its name from the first ship to brave the passageway between the peninsular and the Joinville Island groups back in 1902, the Sound is a raw, sensory assault of imposing iceberg slabs, broken away from the disintegrating Larsen Ice Shelf. Come face-to-face with stadium-sized islands of ice and meet the extraordinary birdlife that call this whitewash kingdom home. Watch on, as colonies of Gentoo penguins hop around, and cape petrels sweep overhead, as the continent’s unique wildlife thrives around you. If you’re planning your first venture into Antarctica, you’ll want to brush up on your photography skills in advance, to capture this unforgiving continent in all of its unrestrained glory. Read our blog for tips on how to ensure that your photos do justice to the adventure of a lifetime. 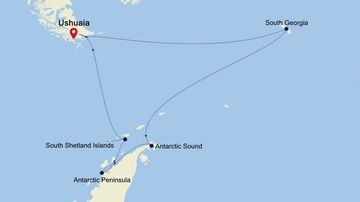 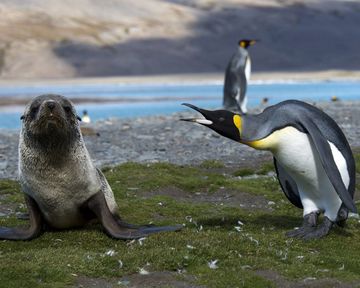