Sailing the legendary Drake Passage is an experience that few are ever lucky enough to experience. The southern tip of the Americas already feels like a wild enough environment – but the sensation of watching the distant cliffs of the peninsular known as the ‘End of the World’ fade into the horizon, is one that’s equal parts epic, eerie and magical. Set sail, to slowly drop off the bottom of the map from Cape Horn, and voyage on an expedition down into the icy underworld of Antarctica. Drake Passage is an extraordinary voyage of romantic ocean faring legend, as you aim for Antarctica’s icy realm. On arrival, skyscraper sized icebergs salute you, as you traverse the waters of this continent where snow and ice dwelling creatures like penguins and whales roam undisturbed. Your first sight of this most-unexplored place will most likely be the South Shetland Islands. Walk in the footsteps of some of history’s greatest and bravest explorers as you explore famed, snow-covered landmasses like Elephant and Deception Island. If the journey across Drake Passage sounds daunting, don’t worry – even in rough seas you’re never alone, and will often be accompanied on this spine-tingling adventure by soaring albatrosses and maybe even a protective pod of humpbacks and hourglass dolphins or two. Converging warm and cool ocean currents attract some spectacular animal life to the passage.

The Polar Circle is an imaginary line based on the earth’s axial tilt at 66° 33’ 44.8” North and South. By definition everything below the southern Polar Circle (i.e. further south) is Antarctica. In the case of the Antarctic Peninsula ships will try to go past the Biscoe Islands, heading for Marguerite Bay. There are very few scientific stations or bases south of the Antarctic Circle as the ice conditions can make it difficult to bring in personnel, material and provisions by ship. Argentina and the UK both maintain permanent stations in Marguerite Bay, while Chile has a summer station at the entrance to the bay. The main attraction here is what makes it so difficult to reach: a land and sea scape covered in snow and ice. 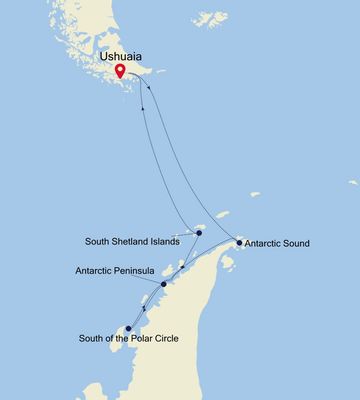 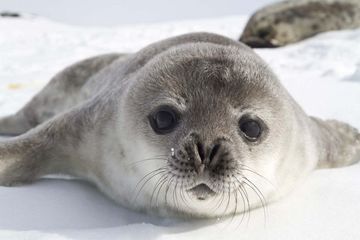