With its 1,150km² King George Island is the largest of the South Shetland Islands. One of the islands closest to South America and only some 120 kilometers from the Antarctic Peninsula, King George Island was first seen by William Smith in 1819 and was named after George III, King of the United Kingdom of Great Britain and Ireland and King of Hanover. Despite the fact that almost 90 percent of the island’s surface is covered by ice and glaciers, 10 different nations have permanent bases or stations set up on Fildes Peninsula, along the shores of Maxwell Bay and at Admiralty Bay. Base Eduardo Frei Montalva (named after Chile’s president when the meteorological station was opened in 1969) is Chile’s most important in Antarctica as it has an airstrip used for flights from and to Punta Arenas and the civilian settlement Villa Las Estrellas. Even though the island boasts so many stations and base personnel, the island still has other summer inhabitants one regularly connects with Antarctica: Adelie, Chinstrap and Gentoo Penguins. Weddell and leopard seals can be seen in the water or on the shore, and seabirds like the Giant Petrel are never far off. 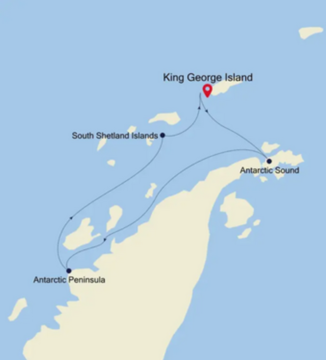